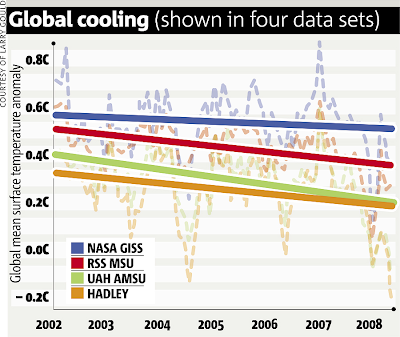 I knew I have to write you when I saw this:

Without asking any climate expert you deliver information which is heavily cherry picked and doesn't have anything to do with the word "climate". Check the definition here:

"Climate (from Ancient Greek klima, meaning inclination) is commonly defined as the weather averaged over a long period of time.[2] The standard averaging period is 30 years,[3] but other periods may be used depending on the purpose."

As you can see, the graphs in your article do not have anything to do with climate, they just show short-term temp data. If you want to know what has been happening in climate during the past decade the best way is to compare decadal temperatures and if you do that, you'll see that this decade is almost 0,2 degrees Celcius warmer than the previous one. Even the current 5 year period is warmer than the last 5 years!

All this (as well as graphical demonstration of how heavy the cherry picking in your graph is) is really well shown here:

The writer is a mathematician with very good skills in statistical analysis. Here's what he thinks of the conclusions of people who have repeatedly used exactly similar graphs as you did:

"Anyone claiming to be a real scientist, who repeatedly makes blatantly false claims about trends in temperature data, is either the worst kind of liar, or really, really stupid."

I hope next time you ask for a real climatologist for facts before publishing stuff like that. The climate is warming, even though there is (and always will be) a lot of noise in the data because of natural phenomena such as ENSO, NAO, solar cycles and many others.

You cannot find a single climatologist in this world who'd claim that every year is warmer than the previous one. Therefore the conclusions you made in that article are just attacks against straw men made by climate denialists. What is happening in climate is consistent with climate models which all show that it's still getting warmer if you look at climate trends instead of short-term temp data. If you don't believe me, ask a professional. BTW, a meteorologist is not a professional in climate issues.
Best regards